KREBS — Sam Lovera likes to say the world is shrinking.

This comes from a man who grew up in Krebs, went to college in California and spent summers in Italy only to find all he ever needed had been downstairs since the day he was born. Downstairs from the home Sam grew up in was Lovera's Italian Market, which his father opened in 1946.

The family market specializing in traditional Italian goods continues today in the same sturdy rock building constructed in 1910. The red, white and green awning above the entrance signifies Italian culture, which is at the heart of Lovera's and Krebs, which is near McAlester in eastern Oklahoma.

Long before the era of the foodie, this little coal-mining town set the standard for celebrating food. Its reputation as Oklahoma's Li'l Italy was cast decades ago, and the foundation of that title is built on pasta, cheese and sausage.

Sam, 56, and his son-in-law and chief cheesemaker, Shawn Duffy, 32, are well aware of how the Internet has shrunk the world and aim to welcome it in for something to eat.

Shawn trekked to Raleigh, N.C., for the American Cheese Society's annual national conference in August and brought back silver in the category of Italian-style cheeses. Finishing first and third was national cheese giant BelGioioso's.

But nobody here could've been surprised. Lovera's and the culinary exploits of Krebs have their own chapter in Oklahoma mythos.

Duffy was born in Pennsylvania, but moved to Oklahoma at age 8. Working in restaurants since he was old enough to work and while he worked toward a degree in ecology, Shawn's scientific background is a perfect fit for cheese-making.

“There's so much you can do with cheese. Once you learn the process, you start to see the possibilities.”

“There's so much you can do with cheese,” Shawn said. “Once you learn the process, you start to see the possibilities.”

The D.O.P. — Denominazione d'Origine Protetta — is Protection of Designation of Origin. Just like sparkling wine not grown in the Champagne region of France can't be called champagne, provolone-mozzarella stretched, brined, dried, hung and aged outside of Italy can't be called Caciocavallo.

And that's the name that was on the cheese that finished second at the ACS conference in the category of Italian-style cheeses.

“It was our first year to compete, so it is the only cheese we brought,” he said. “Next time, we will bring more.”

Duffy is in his fifth year as cheesemonger at Lovera's, and his father-in-law couldn't be happier. 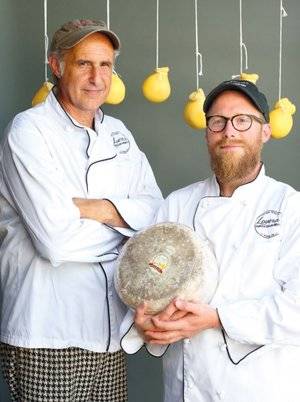